You are here: Home > Cancer Care

Community Hospitals and Wellness Centers (CHWC) is proud to offer state-of-the-art medical oncology and radiation oncology care to our community. Bryan Hospital now offers a medical oncology clinic specifically for the diagnosis and treatment of benign and malignant cancers. When you or a loved one need the very best cancer care available, you will find it right here at CHWC.

Medical Oncology
Located on the second floor at Bryan Hospital.
To schedule an appointment, call 419-630-2291
Learn more about the CHWC Medical Oncology Clinic by clicking here.

Radiation Oncology
Located just across the street from Bryan Hospital, at 524 W. High St.
To schedule an appointment, call 419-636-9800
Learn more about the CHWC Radiation Oncology Center by clicking here.

Board Certification: American Board of Radiology 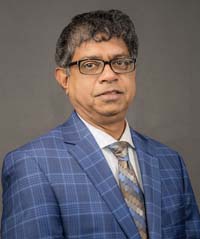 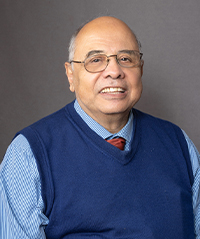 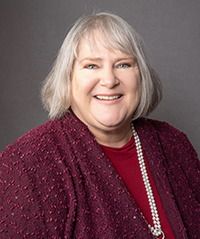 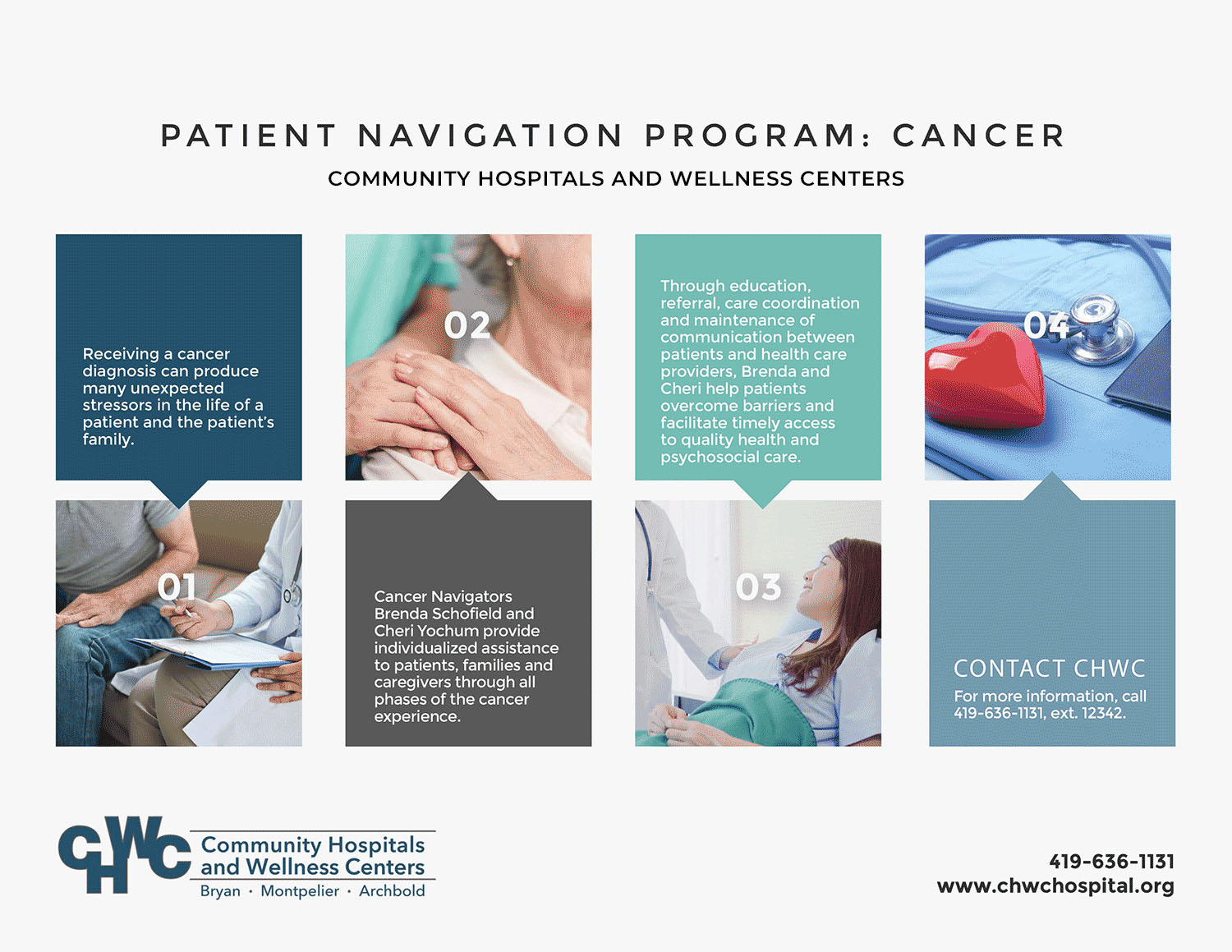 Receiving a cancer diagnosis can produce many unexpected stressors in the life of a patient and the patient’s family. Cancer Navigators Brenda Schofield and Cheri Yochum provide individualized assistance to patients, families and caregivers through all phases of the cancer experience.

What is Medical Oncology and Radiation Oncology?

The science of studying and treating malignant cancer and associated tumors is called oncology. Medical oncology is a subfield of oncology that focuses on treating cancer with medications, radiation therapy, chemotherapy and hormone therapy.

What Types of Cancer Do Medical Oncologists Treat?

AML begins in bone marrow and quickly moves into the bloodstream where it often spreads to other parts of the body. People who smoke, are over 50, are male and long-term exposure to the solvent benzene are risk factors for AML. Some evidence suggests AML may be genetic. Symptoms of AML include bone pain, reoccurring nosebleeds (when no other cause exists), unexplained bruising and excessive night sweats. Samples of blood and bone narrow are needed to diagnose AML.

When bladder cells start growing uncontrollably, they may form small tumors that become cancerous. In most cases, bladder cancer is diagnosed early enough to respond successfully to radiation therapy. Signs of possible bladder cancer include bloody urine, frequent and painful urination and lower back pain. The most common type of bladder cancer is transitional cell carcinoma. TCC represents over 90 percent of all bladder cancer diagnoses.

Chronic coughing, phlegm containing blood specks, wheezing and recurring respiratory infections are some signs of lung cancer. The leading cause of lung cancer in U.S. adults is smoking, followed by excessive exposure to second-hand cigarette smoke and/or air pollution. Diagnosing lung cancer involves radiologists taking CT scans or x-rays of the lungs to detect signs of possible tumors or lesions. If a lung lesion is detected, a biopsy will be performed to determine if it is cancerous.

A brain tumor may originally develop in the brain or spread to the brain from elsewhere in the body. Nearly 50 percent of all malignant brain tumors are glioblastomas. While less than one percent of the U.S. population will be diagnosed with a brain tumor, the risk of having one increases with age. Extremely rare genetic disorders are associated with brain tumors but there is no clear evidence that brain tumors are hereditary. Symptoms of a possible brain tumor include recurring headaches increasing in severity, unexplained vomiting, vision, hearing and speech problems and balance difficulties.

Esophageal cancer affects more men than women worldwide and is the sixth leading cause of cancer deaths globally. Smoking, excessive alcohol use, age and obesity increase your risk of having esophageal cancer. Symptoms of this disease include difficulty swallowing, chronic coughing and hoarseness, chest pain, vomiting and weight loss.

With the exception of melanoma, prostate cancer is the most common type of cancer diagnosed in men. Problems urinating, blood in the semen or urine and pain in the lower back, hips or chest. Some men may experience erectile dysfunction if they have prostate cancer. A biopsy is typically performed to determine if a man has prostate cancer. A standard rating system called the Gleason Score is used to determine severity of biopsy results. Scores of two, three, four and five indicate the cancer is not likely spread. Scores above five point to possible spreading of the cancer.

Cancer of the rectum or colon begins as small growths called polyps that eventually enlarge and spread to other parts of the body without treatment. More commonly diagnosed in adults over 50, colorectal cancer can affect the rectum, the colon or both. Signs of colorectal cancer include weakness, tiredness, weight loss, bloody stools, rectal bleeding and abdominal pain. CHWC recommends that all adults over 50 consider getting an annual screening for colorectal cancer.

Signs of probably skin cancer involve changes in mole shapes or sizes, bleeding moles and painful skin lesions that burn or itch. Risk of skin cancer is higher among people who tan, spend hours in the sun without using UV protectant, have fair skin and a family history of melanoma. If a doctor suspects a mole or skin lesion is cancerous, they will evaluate a tissue biopsy for signs of abnormal cell growth. Ultrasound tests may be needed if a doctor thinks melanoma may have spread elsewhere in the body.

Cancer can impact so many lives, from the people who are diagnosed to the loved ones who help manage their care. Luckily, with increased technology, there are now more options than ever before when it comes to treating cancer. Working closely with your team of doctors you will be able to create a custom care plan that helps to manage, and possibly cure, your cancer. Of course, you may have several questions when it comes to care during this frightening and uncertain time. Below, we have put together a list of some commonly asked questions when it comes to cancer care.

What kind of treatment will I receive?
Really, this depends on the type of cancer you are diagnosed with, how much the cancer has spread, and your current health. Some cancers respond to certain treatments better than others, and any existing conditions may impact the type of treatment you are able to receive.

Can’t you just perform surgery and remove all the cancer?
In some cases, yes, this is possible. The surgical team will be able to discuss different surgery procedures that can remove a cancerous tumor from the body. In other types of cancer though this is not possible, or results in a complicated surgery. Cancers that impact the blood, such as Leukemia, are not operable.

If I had surgery already, why do I need more treatment?
While surgery certainly does a great job at removing certain cancers, it always runs the rusk of leaving some cancerous cells behind. By using chemotherapy or radiation treatment methods after surgery doctors can be sure to kill every cancerous cell.

What other treatments are available besides chemotherapy and radiation?
Our team is always researching and practicing the very latest treatment options available for cancer. Our team can implement hormone therapy treatment as well as immunotherapy treatment to target and attack your cancer.

Will I lose my hair during treatment?
While hair loss certainly is a common side effect when receiving chemotherapy treatment, it doesn’t happen to everyone. The type of chemotherapy, duration, frequency, and your own body will dictate how and if you lose your hair. Feel free to talk with one of our professionals about options if you do lose your hair. We have several close contacts to provide wigs for people suffering from hair loss.

What is the difference between chemotherapy and radiation?
Chemotherapy administers specific drugs into the entire body in an attempt to mitigate and kill cancer cells. Comparatively, radiation uses nuclear medicine technology to target one specific area of the body. Patients may receive one treatment or the other, and sometimes a combination of both treatments.

Who will be my doctor?
One of the best parts of working with Community Hospitals and Wellness Centers is the fact that we work with an oncology team. A group of professional doctors and nurses are always talking with one another about your case, researching and discussing the best treatment, surgery, and care options available for your specific cancer.

What else can cancer impact?
We understand that cancer is not just a physical ailment that you experience, but a mental and psychological one too. Cancer can change your mindset, easily allowing people to become anxious and depressed. That is why we are happy to offer psychological care to accompany your physical cancer treatments. A healthy mind can do wonders when it comes to healing the body.